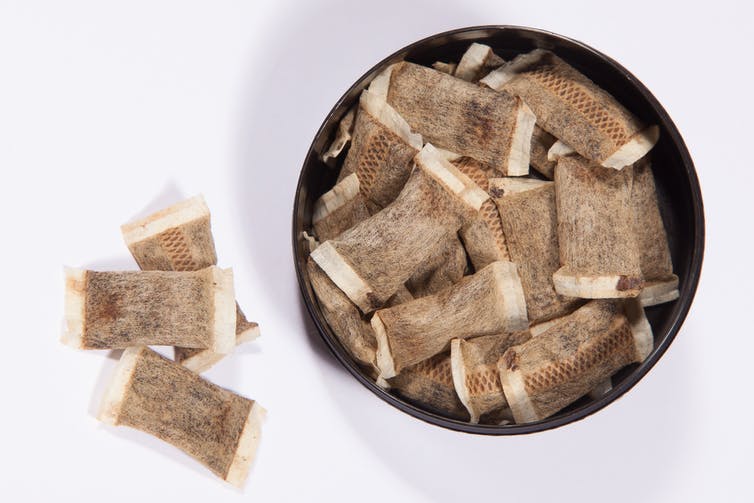 Smokers looking for a less harmful way to get their nicotine fix should switch to Swedish snus — a smokeless tobacco that puts them at a significantly lower risk of cancer than cigarettes, doctors say in an article posted online Thursday in The Lancet.

Smokers are at least 10 times more likely to get lung cancer than people who use snus, studies showed — a finding that could challenge bans on snus, particularly in the European Union.

All EU nations now prohibit snus, except for Sweden, which was granted an exemption because of the widespread use of the powder tobacco among Swedes. In the United States, smokeless tobacco is legal, and Swedish snus is being test-marketed in at least two U.S. cities.

“The banning or exaggerated opposition to snus in cigarette-rife environments is not sound public health policy,” they wrote.

One study tracked the incidence of cancer over among nearly 280,000 Swedish men — some of them snus users, some smokers and some who never used tobacco — over a 20-year period. The other projected the effect on health if snus were introduced in Australia, where it currently is banned.

Swedish snus makers say the production process there is different from similar products in the U.S., adding that they work hard to remove carcinogens during manufacturing.

But snus is far from harmless; about 30 carcinogens have been found in the smokeless tobacco. In 2004, the Luxembourg-based European Court of Justice upheld a ban on the substance, ruling that the dangers of snus merited its being outlawed.

However, the two studies show snus may not be as harmful as previously thought, and far less harmful than cigarettes.

International researchers followed 279,897 male Swedish construction workers from 1978 to 1992. About 26 percent were snus users, 37 percent were smokers and the rest never used tobacco.

The study also showed that using snus did not increase the risk of oral cancer, though users might develop mouth lesions where the substance is placed since it generally is tucked inside the upper lip. In addition, using snus can complicate pregnancies and may raise the risk for heart disease.

In the modeling study, Australian researchers found that lifting current restrictions on snus would probably benefit public health if the smokeless tobacco is adopted by people who would otherwise continue smoking.

In Sweden, many smokers have switched to snus, and the country now has one of the lowest smoking rates in the world: less than 20 percent of the population.

Some experts worry that legalizing snus could still have harmful effects.

“As with all tobacco products, snus is not completely risk-free,” said Jean King, director of tobacco control at Cancer Research UK. King, who was not connected to either study, said that while snus could help smokers quit, it would be important to prevent snus from being adopted by new users.

Smoking is the top risk factor for cancer, and approximately 1 billion people worldwide are addicted to the nicotine in cigarettes. Tobacco kills one in 10 people globally, and causes 4 million deaths every year.

“For a smoker, quitting all tobacco use is best, but failing that, switching to snus is a good idea,” said Dr. Peter Hajek, professor of clinical psychology at Queen Mary University Hospital in London. Hajek was not involved in either study.

“If a sufficient proportion of smokers switched to snus, lifting the ban could be in the public interest,” Hajek said.
___

On the Net:
http://www.lancet.com
http://www.cancerresearchuk.org
Copyright © 2007 The Associated Press. All rights reserved.