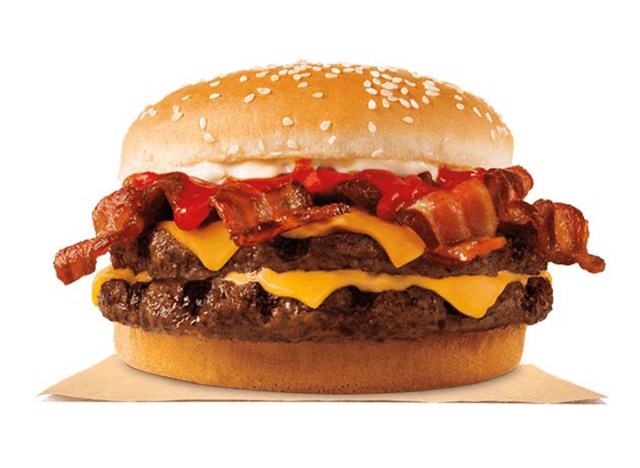 There are cows out there having nightmares right now as Burger King has announced that they’re producing a 1,160 calorie sandwich that has enough meat to make a grown lion back off.

This monster sized sandwich is called the ‘Meat Monster’ and has two hamburgers, a chicken breast fillet, three strips of bacon, two slices of cheese, and a small garden of lettuce, tomatoes, and onions. Fortunately for the rest of the world the sandwich is only available in Japan.

It’s bad enough that Japan is recovering from a monster quake and tsunami but now they have to deal with Burger King shoving a sandwich so big and full of calories that a family of four could probably live off of it for a week.

It’s loaded with 24 grams of saturated fat, 13 grams of sugar and 1.5 grams of trans fats. Not only is it loaded with all that it’s packed with 2,290 milligrams of sodium which breaks every health standard in the known world for daily salt consumption.

There should be a health alert sent out by the UN regarding this new sandwich from Burger King. With people keeling over from fat and sodium in their diets to unleash this monster on the unsuspecting public should be considered a crime against humanity.