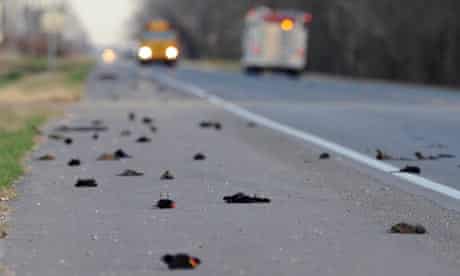 In Beebe, Arkansas, it was speculated that some sort of internal injuries caused the birds to come hurling from the sky.
The birds had formed blood clots, likely due to high-altitude lightning or hail. It has also been speculated that fireworks may have caused the deaths.

Notably, the birds that died in Arkansas are the same species of the birds that dies in Louisiana. They are blackbirds. A disease affecting the entire species seems unlikely, but has yet to be ruled out. Full test results will be complete next week. For now, the case remains a fearful mystery for local residents.

Last week, 83,000 drum fish washed up dead on the Arkansas River. Timeliness led to increased fear, but wildlife officials maintain that the bird and fish incidents are unrelated.

It has also been reported that dead birds have been found in Kentucky, where a women found a number of dead birds in her yard on Monday. The deaths in this case number significantly less that the deaths in Arkansas and Louisiana.